My 7 favorite books: What I recommend everyone reads to feel better about the future

It is a difficult time right now and it is easy to think the world is ending.  So many of our problems are so humongous that it is easy to be overwhelmed and give up.  What on earth is one person supposed to do?  I think as dark as things look now we will pull through and the books below are a large part of why:

1) This book details the story of the Santa Fe Institute while also describing examples of applied complexity theory. Most people have heard of chaos theory and how everything in the universe is move towards disorder.  I remember a professor related an example how opening a can of coke increases entropy and therefore contributes to bringing about the end of the universe.  But that is only half the story, because while certain thing in nature move towards disorder other things in nature move towards order.  The molecules in liquid water will self-organize into a crystalline structure when their temperature is lowered to 32 degrees Fahrenheit. As humans we self organize into more complex groupings from villages to towns to cities which can be studied as highly complex organisations. The book lays out how thinkers in various field came together to form the Santa Fe Institute.  Economics, weather, mathematics, artificial intelligences are all fields that complexity theory is applied to.  The two examples I remember best are how Santa Fe Institute helped FedEx improve there package transfers and how to prove that "nice guys" finish first using a simple computer problem called "the prisoner's dilemma.

and his follow up after what he realises what is being done to first world by the banking system after he was responsible for applied ruthless economic finance practises on third world countries in the sixties and seventies.  I read the first half or more and my first thought was "Why on earth did you wait so long to write this book!?!" since him claims to be an insider.  Of course, once you finish the book he ends it on a positive note with the numerous changes he sees coming around the world.  One story he recounts is being at a green conference where he ends up in the hot tub with a CEO of what used to be one of the worst polluting corporations and a eco-protester who was instrumental in force the company to change its ways.  In a situation he at first felt awkward was since the protest had turned "nasty" changed when the CEO thanks them both for giving him the opportunity to initiate change in the company. The CEO mentions how he had discussed making changes to the companies policy but he was a prison of "stockholder" opinion as much as anyone else.  Corporations are not inherently evil and it has more to do with our current system of endless growth and how we now have a system that promotes profit at all cost.  (also discussed in The Watchman's Rattle: Thinking Our Way Out of Extinction- which I have below.)

He also mentions speaking with MBA graduates and how much the attitudes changed in only a year.  Where earlier the new MBA's were talking about money and what they would earn new graduates talked about the volunteer work or non-profit work they would dedicate themselves too once their student loans were paid off.  Things will get better as we realize we are all in this together!

3) This is the book that introduced me to barefoot running which I have written about extensively.  I can't say enough about what it means to be able to run again. A part of my philosophy is how important regular physical activity is for our health and how it is a main thing each of us can do to improve ourselves and collectively improve society. With regular exercise your health improves but so does you attitude.  You will be nicer to those around you. Now for me running is key, but I encourage people to read this book and try running- but do something.  It also contains a great story about a pacifist culture that is now being threatened by Mexican drug cartels.  Whether or not you are interested in bare-footing, it is a great read.  I also had the pleasure of meeting the author, Christopher McDougal a few weeks ago through a barefootnyc.com event. 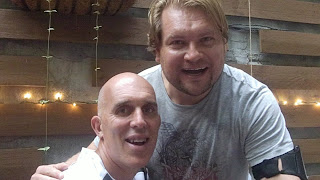 4) In this book, the follow up to the author's (Michael Pollan) The Omnivore's Dilemma: A Natural History of Four Meals

, he gives very simple diet advice with just seven simple words: Eat Food, Not too much, mostly green.  He defines
food as something our great-grand fathers would recognize. A lot of information is given about the reduction in the variety of food "products" while simultaneously reducing our variety of natural foods from industrialized farming.  I actually recommend both his books, but this one is the easier read.  His two books also talk about "real organic" and locally produced food with details about Poly face farms.  A large reason industrial food is such a problem is how much it is dependent on fossil fuels, not just for the machinery or transportation, but also for fertilizer and pesticides.  Read the website, Poly Face Farms is a true organic farm that requires very little fossil fuels and the soil gets healthier every year.   I highly encourage you to check out the book and the farm.  I think this is the future of farming.

5) This a follow up to Good Calories, Bad Calories: Fats, Carbs, and the Controversial Science of Diet and Health (Vintage)

.  This is basically an abridged or summary version of the earlier book.  In it Gary Taubes outlines how sugar and starches cause us to become insulin resistant and one it starts it is a positive feed back loop that once it begins the only way to cure the imbalance is by foregoing sugars and starches.  A few key things I learned from this book: originally obesity was treated as a disease and early doctor prescribed bed rest, there is no such thing as an essential carbohydrate, and weight gain is all about insulin response.  He make a compelling case against calories in- calories out and that weight is all about hormone response.  While not a diet or weight book itself it does give a lot of good information on why most of the problem may be insulin resistance and current accepted theories about calorie intake are not just off, but plain wrong.

6) This is the book I have most recently read and the one I have frequently quoted both in personal discussions and on this blog. (And the author, Rebecca Costa, actually commented on my blog here, which really blew my mind.) I actually bought this book from Border Books and Music during their going out of business sale and boy am I glad I did. She describes the root cause failures of three of the greatest civilization that lasted for centuries but eventually were overcome by their own success when complexity out grew the faculties to solve the problems.  What actually caused their failure was their inability to differentiate mitigations from actually solutions and delay the problem for the next generation to deal with.  She also articulated something I felt for the longest time. When presented with a problem with not solution the way to solve it is to apply every available mitigation at once not piecemeal while continuing to posit the problem (brainstorm, trial and error, I know actually thinking, etc.).  Instead we apply a single mitigation, fire someone, and move on until the problem returns large than before.  She mentions supermems which are belief we all hold to be true but in reality are not. I have more to say, but for now I will mention that one of the things some of the reviewers I read on amazon.com think she misses overpopulation as a root cause. I disagree and feel she is correct to omit overpopulation as a root cause because it is most of our current wasteful systems that make our growing population a problem- not the magnitude of the population itself.  The quick example I would give is a quick thought experiment. (and feel free to comment if you don't agree- I am going out on a limb here.) If we suddenly discovered a Stargate (Extended Cut) [Blu-ray]

7) I met this author as well at the PSAM 10 and got him to autograph his book: The Failure of Risk Management: Why It's Broken and How to Fix It

.  He also wrote How to Measure Anything: Finding the Value of Intangibles in Business

.  The reason this book makes the list is that one of our system problems is how inaccurate our data is.  The internet is opening up all kinds of opportunities for real time (or near real time) feedback on so many different aspects of our society.  A large part of the problem is judge the success of applied solutions and also the inherent bias in many of the scientific studies that are done.  Actually, in Al Gore's book The Assault on Reason

, he defines it as for the last century information media has been hierarchical with top-down control.  The internet is allow a flow of information both ways and now it is possible to find the real truth.

So there it is, seven books that may help make sense of the world, define the problem, promote actual solution, and help give a positive attitude on the future. This is just the start and most of these books are the "lite" version or will hopefully lead you to read other books.

Knowledge is power-- Sharing knowledge is true power.  Pay it forward and lets work together for the future.  Because alone we will fail.

Lastly, if you have any books you recommend- let me know by any means.

Thanks, Frank
Posted by rocketsciencesense at 8:02 PM

Email ThisBlogThis!Share to TwitterShare to FacebookShare to Pinterest
Labels: review