So on April 30th while Paul Krugman was guest hosting Bloomberg TV Ron Paul was brought on for a live debate. My quick take is neither side had time to back up the assumption presented- how was the prosperity and growth right after WWII achieved in America. I agree with Ron Paul's assertion that the depressions debt was .... and the federal government slashed spending and debt.  But I believed that before the debate so I feel the debate was a tie.  (one note: Krugman actually saying we are in a depression!)

According to the NON-scientific bloomberg TV twitter poll most people disagree and call Ron Paul the winner.  https://twitter.com/#!/trish_regan/status/197496770253701120

The real debate occurred the last decade: (picture below taken directly from link above) 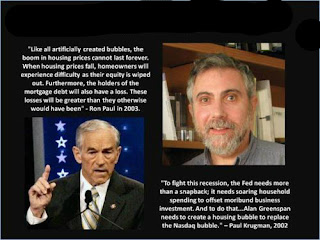 (I actually posted Krugman's quote on Facebook and a friend researched it claiming it is taken out of context and it is a joke.  I don't get it.)

[also taken from the above link]

Control of the world’s economy has been placed in the hands of a banking cartel, which holds great danger for all of us. True prosperity requires sound money, increased productivity, and increased savings and investment. The world is awash in US dollars, and a currency crisis involving the world’s reserve currency would be an unprecedented catastrophe. No amount of monetary expansion can solve our current financial problems, but it can make those problems much worse.

Would a rise in inflation to 3 percent or even 4 percent be a terrible thing? On the contrary, it would almost surely help the economy.


How so? For one thing, large parts of the private sector continue to be crippled by the overhang of debt accumulated during the bubble years; this debt burden is arguably the main thing holding private spending back and perpetuating the slump. Modest inflation would, however, reduce that overhang — by eroding the real value of that debt — and help promote the private-sector recovery we need. Meanwhile, other parts of the private sector (like much of corporate America) are sitting on large hoards of cash; the prospect of moderate inflation would make letting the cash just sit there less attractive, acting as a spur to investment — again, helping to promote overall recover.

I have heard a few economist who already claim that our debt is too big to ever be repaid.

This has succeed because the dollar is the reserve currency accepted through most of the world.  This is talk about this eventually ending.  There seems to be this idea that we can continue deficit spending eternally, but I believe that we cannot. So it is not there I am against the intentions of our government- it is this belief that something is "too big to fail".  We must also consider the results of these programs.  We have created and upheld a system with single point failures for decades now.  The biggest danger is the longer we ignore the harsh realities and continue to "kick the can down the road" (due to complexities to great for any one person to understand or solve- which leads to endless debates) the worst the problem gets. [I will once again recommend everyone check out "The watchman's rattle" which details how other societies reacted to complex long term problems.]

Posted by rocketsciencesense at 5:54 AM 3 comments: