I just finished listening to this book on CD.  I have to say, not being a fan of Mr. Gore, but I was impressed.  I really enjoyed the beginning and the end of the book.

In the first part he lays out an interesting relationship (shown below) between reason, faith, and passion (or fear). He describes it as a rock-paper-scirrors analogy then made sense to me.  I really like his asseration that we need a balance and further described what he believed the reason W was so popular.  He also goes on to mention how our founding fathers were lead by a better combination although mostly be reason.  I have to agree with Mr. Gore.  What I really find interesting is how well this meshes with another book I am reading (The Watchman's Rattle: Thinking Our Way Out of Extinction

).  Basically, the author there asserts that our fear leads us to fall on beliefs and once we abandon reason we ignore root cause solutions in favor of mitigations.  I will write another blog review about that book later.

The bulk of the book goes into the failures in our reasoning that lead us into the Iraq war.  I was particularly distrubed by some of the facts he proported- that 70% of us Americans believed Iraq was linked to Alqeda. He continues on how most of us get our information from television and how the information flow is one way.  Next he asserts that a small majority now control that information and he is mostly correct.  Once that power is available it can and is being abused. 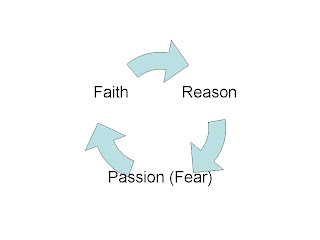 The last part of the book he talks about the internet and how the future will be shaped by a better two way flow of information. Given that the book was published 2008 we are seeing how the internet is beginning to affect politics in the middle-east.


Overall, I felt Mr. Gore gave a very astute account and I agreed with his main points. I definitely recommend checking it out. I was also impressed with his even-handed approach and how graciously he complimented President George W. Bush. I would not say I am now a fan (not that I knew too much before), but I certainly have a better opinion on the man.
Posted by rocketsciencesense at 9:38 AM